In stock
SKU
576A
Be the first to review this product

Contains the most effective and safe plant derived lecithin (from non-GMO soy).
The product has been manufactured using high quality pure raw materials and the technology that ensures all their beneficial properties intact, in strict compliance with GMP and TÜV regulations. 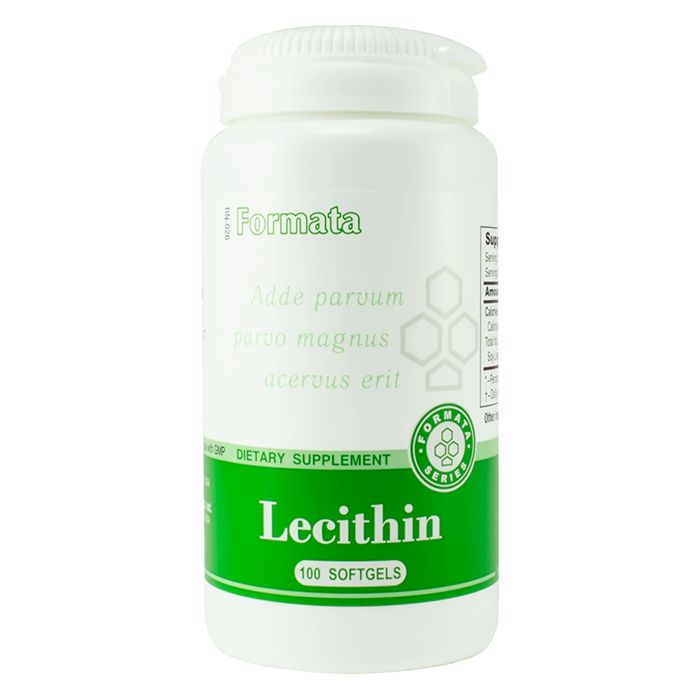 Lecithin is a mixture of phospholipids (choline, inositol, etc.), which are essential for every cell of the human body. Lecithin is an integral part of the cell membranes, the protective sheaths surrounding the brain, muscle and nerve cells.

The word "lecithin" comes from the word lekithos, which is Greek for “egg yolk.” Lecithin was first discovered in 1850 when the French scientist Maurice Gobley isolated the compound from an egg yolk.

Choline is the precursor to acetylcholine, an important neurotransmitter responsible for normal brain functioning.  Acetylcholine is important for many brain functions including memory, so increasing concentration of this neurotransmitter can result in improved memory. Choline is important for the brain development of infants and for the adults during periods of illness or stress.  That’s why lecithin is often referred to as "brain food."

Lecithin is essential for the proper functioning of the nervous system.

Lecithin is important in energy production, improves cell oxygen supply, and promotes fat-soluble vitamin A, D, Е and К absorption, which are essential for nourishing every cell in the body.

Various studies indicate that lecithin may positively affect cholesterol and triglyceride levels. Lecithin is a fat emulsifier; it binds with cholesterol and other fats, forming fat-water emulsion, which is then excreted from the body, thus preventing atherosclerosis and other cardiovascular diseases.

Lecithin helps keep the liver healthy. By keeping fats dispersed in water, lecithin prevents these fats from accumulating in the liver. Lecithin is acting as a hepatoprotector, helps in detoxification, may be useful in restoring liver function in a number of ailments including excessive alcohol consumption.

Syntegra’s product Lecithin contains 520 mg of soy lecithin in every capsule. It is established, that lecithin of a vegetable origin is much more effective than lecithin of animal origin.

Lecithin should be a part of everyone’s healthy diet; it is especially useful for elderly people, because lecithin level in the body decreases with age. Lecithin stimulates mental and physical activity, helps fight stress, and enhances vitality.

As a dietary supplement take one capsule with a large glass of water three times daily with meals for 1 month.

Lecithin (often referred to as phophatidylcholine) plays vital roles in many basic biological processes in the body, it is important for the integrity of cellular membranes and overall health.  About 30 percent of the brain's dry weight is composed of lecithin.  Lecithin also represents nearly 70 percent of fat located within the liver. Until the 1930s, the primary source for commercial lecithin had always been eggs. In 1930 it was found that lecithin could also be obtained from soy. Vegetables now represent the most popular and most bioavailable sources for dietary lecithin. Soybeans, sunflower, rapeseed, grains, wheat germ are the most frequently used plant sources.


Soy lecithin is a byproduct of soybean processing. At first, the soybeans are tempered by keeping them at a consistent temperature and moisture level for approximately seven to 10 days. This has a hydrating effect on the soybeans, loosening it from its hull. Then, the soybeans are cleaned and cracked into small pieces. The cracked beans are separated from the hulls and are heated and pressed into flakes. Next, the flakes undergo a distillation process where the soybean oil is extracted, after which crude soy oil is made to undergo a “degumming” procedure. The sludge that is produced as a result is where soy lecithin comes from. Of course, the sludge would have to undergo another process first, to extract the lecithin.


Lecithin contains three types of phospholipids: phosphatidylcholine, phosphatidylethanolamine, and phosphotidylinositol. Phosphatidylcholine contains choline, which is essential to every living cell in the body and is one of the main components of cell membranes. It seems majority of the health claims about soy lecithin may have something to do with the fact that it is an excellent source of choline.


Pharmacological use of lecithin primarily includes treatments for hypercholesterolemia, neurologic disorders, and liver ailments. Lecithin is also used as an emulsifying and stabilizing agent in the food, pharmaceutical, and cosmetic industries.

Dietary soy lecithin supplementation decreases hyperlipidemia and influences lipid metabolism. Although this product is used by diabetic patients, there are no data about the effect of soy lecithin supplementation on the immune system. The addition of phosphatidylcholine, the main component of lecithin, to a culture of lymphocytes has been reported to alter their function. If phosphatidylcholine changes lymphocyte functions in vitro as previously shown, then it could also affect immune cells in vivo. In the present study, the effect of dietary soy lecithin on macrophage phagocytic capacity and on lymphocyte number in response to concanavalin A (ConA) stimulation was investigated in non-diabetic and alloxan-induced diabetic rats. Supplementation was carried out daily with 2 g kg(-1) b.w. lecithin during 7 days. After that, blood was drawn from fasting rats and peritoneal macrophages and mesenteric lymph node lymphocytes were collected to determine the phospholipid content. Plasma triacylglycerol (TAG), total and HDL cholesterol and glucose levels were also determined. Lymphocytes were stimulated by ConA. The MTT (3-(4,5-dimethylthiazol-2-yl)-2,5-diphenyltetrazolium bromide) dye reduction method and flow cytometry were employed to evaluate lymphocyte metabolism and cell number, respectively. Soy lecithin supplementation significantly increased both macrophage phagocytic capacity (+29%) in non-diabetic rats and the lymphocyte number in diabetic rats (+92%). It is unlikely that plasma lipid levels indirectly affect immune cells, since plasma cholesterol, TAG, or phospholipid content was not modified by lecithin supplementation. In conclusion, lymphocyte and macrophage function were altered by lecithin supplementation, indicating an immunomodulatory effect of phosphatidylcholine. (1)

In conclusion, the first experiment suggests that the cholesterol-lowering efficacy of the AHA Step I diet can be enhanced with the addition of soy lecithin without reducing plasma HDL-C levels, whereas the second experiment suggest that the hypocholesterolemic, and in particular, the anti-atherogenic properties of soy lecithin cannot be attributed solely to its linoleate content. (2)

Lecithin has also been used for immune modulation, activating specific and nonspecific defense systems in 20 patients receiving 1 teaspoonful 3 times daily for 30 days. (3) Preliminary results from various clinical trials suggest that lecithinmay be an effective agent in the treatment of various types of alcohol and non-alcohol induced liver damage. (4, 5) For many individuals suffering from liver disorders spawned by toxins, viruses, and disease, phosphatidyl choline has proven more tolerable than choline when used for the enhancement of proper liver functioning.

In one particular mammalian study, a 60 percent phosphatidyl choline supplement was used on test subjects with diets high in alcohol consumption.  Both liver fibrosis and cirrhosis were prevented in the test groups receiving a PC supplement.  Lecithin may provide certain hepatoprotective effects. (6) Its protective benefits may also be equally effective in organs adversely affected by nonsteroidal anti-inflammatory drug (NSAIDs) treatments. (7)

This experiment (N = 80, college students) employed a double-blind mixed design to test the effect of phosphatidylcholine (PCh) on explicit memory. Dose of placebo and PCh was compared at two levels (10 and 25 g) as was time of testing postingestion (60 and 90 min). With 25 g of PCh, which supplies 3.75 g of choline, significant improvement in explicit memory, as measured by a serial learning task, was observed at 90 min postingestion and slight improvement was observed at 60 min postigestion. Further analyses indicated that this improvement may have been due to the responses of slow learners. This is the first study to test the relationship between a single dose of PCh and explicit memory on normal human subjects. (8)