In stock
SKU
587
Be the first to review this product

SaniTea™ is a synergetic combination of herbs, manufactured using the patented fermentation process that helps to increase the effectiveness of the product.

All natural Santegra®’s products, including SaniTea™, have been manufactured using high quality pure herbs and the technology that ensures all their beneficial properties intact, in strict compliance with GMP and TÜV regulations. 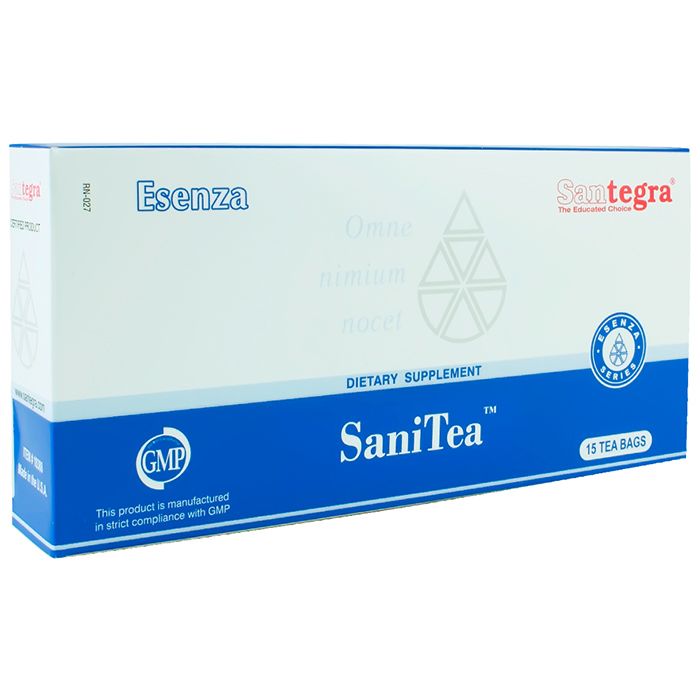 Everybody knows the importance of personal hygiene. We have progressed in the area of sanitation substantially since the middle ages. We can see a big difference everywhere around us, but all of this is happening on the outside. Unfortunately, we cannot look inside our body, behind our clean and attractive cover, we have waste and poisonous materials that clog and intoxicate our body, make us feel tired, and destroy our health.

Scientists have been warning us about these problems for hundreds of years. Many toxic substances enter our body with food, water, and even with the air we breathe. Some of us voluntarily poison ourselves with cigarettes, alcohol and processed food.
Scientists propose that these self-poisoning activities accelerate the aging process in the body.

We offer Santegra®’s product SaniTea™ to everyone who is concerned about their health and wellbeing.
SaniTea™ is a blend of natural herbs that normalizes the gastrointestinal and the urinary system functions, stimulates bowel movements, cleanses and detoxifies the body. SaniTea™ improves metabolism. It is an effective natural laxative. 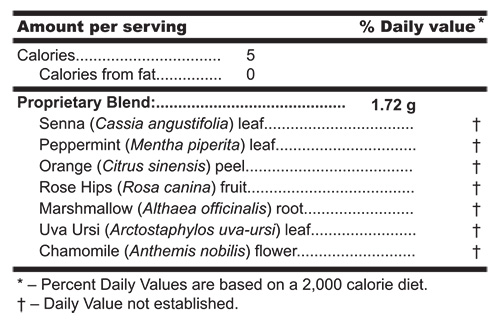 Begin slowly. Steep one tea bag in a cup (240 ml) of boiling water for 2-5 minutes. Do not take sooner than 2 hours after evening meal. Increase steeping time gradually. Steeping time should be individually selected. It is recommended to start this program the night before your day off.

It is normal to experience cramp-like symptoms for the first few days of using SaniTea™.

Individual intolerance, pregnancy, and lactation period, acute digestion problems, glomerulonephritis, children under the age of 12.
Warning: This product contains Senna leaves. Read and follow directions carefully. Do not use if you have or develop diarrhea, loose stools or abdominal pain. Consult your physician if you have frequent diarrhea, taking medication or have medical condition.
Reviews
Write Your Own Review
Only registered users can write reviews. Please Sign in or create an account
Scientific review

Detoxification is the way your body get rid of the toxins that accumulate in cell tissue. And make no mistake about it – everyone has body toxins. Why?

Because toxins are naturally produced through your body's everyday functions; cellular activity generates substances that need to be eliminated. Additionally, you're exposed to environmental toxins on a daily basis in the form of air and water pollution, food additives, caffeine, cigarette smoke, pesticides, and a number of other environmental chemicals. Studies suggest that the cumulative effect of such toxins pose a great health risk.

Then there are the microbes that live in your body – intestinal bacteria, yeast, and parasites – that produce metabolic waste products. And if thinking about so many toxins stresses you out, remember that emotional stress itself generates increased biochemical toxicity.
If you're in good health, you generally can handle exposure to a normal level of everyday toxins; your body is built to handle it. The liver, lungs, kidneys, and bowels constantly work together to detoxify every cell, organ and system in your body – the liver reduces your toxic load by changing toxins into compounds that then are eliminated through the lungs (as expelled air), skin (as sweat), kidneys (as urine) and bowels (as feces). That's why it's essential to keep these organs in top shape.

But problems arise when you take in more toxins than your body is able to eliminate. This toxic overload can lead to a wide range of health problems, such as:
• Headache
• Fatigue
• Aches and pains
• Digestive problems
• Allergy-like symptoms
• Coughs
• Depressed immunity
• Nervousness
• Insomnia
• Dizziness
• Constipation
• Skin rashes
• Mood changes
• Sinus congestion
• Anxiety

Where do you start?
Basic detoxification usually begins with a change in diet. Drinking filtered or bottled water – plenty of water each day – is a good start, as is eating more fruits, vegetables, whole grains, legumes, nuts and seeds. Foods that are best to avoid during detoxification include red meats, cured meats, organ meats, canned foods, refined sugar, saturated fats, coffee and other caffeine drinks, and alcohol.

A more wide-ranging detoxification, however, includes nutritional supplementation. Herbs help to detoxify the body, stimulate and cleanse the detoxifying organs, and assist with toxin elimination.

Simple lifestyle changes, too, can help with the ongoing detoxification of your body. Work to reduce stress and emphasize positive emotions. Get plenty of sleep. And get regular exercise – it's a great way to help your body release toxins. You don't have to do anything fancy; walking, jogging, jumping rope, or practicing yoga all can help you in your detoxification efforts. Even something as simple as taking deep breaths to help oxygen circulate more completely through your system can make a difference.

Retarded colonic transit and disturbed defecation are the most prominent pathophysiological mechanisms in constipation. Both may be influenced by bulking agents and by laxatives such as senna.

We measured gastric emptying, small and large intestinal transit in 24 healthy volunteers by a newly developed method employing a metal detector. Twelve persons taking a normal diet received loperamide in a dose sufficient to double the individual transit time. All subjects measured gastrointestinal transit time under normal conditions and with Sennatin containing purified sennosides 20 mg, Agiocur (30 g) as a fibre product containing 20 g Plantago ovata seeds/husks, or Agiolax (10 g) as a combination of 5.4 g P. ovata seeds/husks + 1.2 g senna pod with a sennoside content of 30 mg.
Colonic transit was reduced by Sennatin and by Agiolax from 39 +/- 4 h to 17 +/- 3 h (p < 0.005). Loperamide prolonged colonic transit from 27 +/- 0.7 to 72 +/- 12 h. This effect was abolished by Sennatin (30 +/- 5 h) and Agiolax (27 +/- 1 h) (p < 0.005), but not by Agiocur (64 +/- 13 h).
The same effects were seen when right and left colonic transit were analyzed separately.  All of the three study drugs increased stool weight significantly (p < 0.05). (1)

Quantity and consistency of the faecal output, large intestine transit time, and colonic net fluid absorption were investigated in rats after oral administration of sennosides A + B (12.5-200 mg kg-1). The release of normal faecal pellets was accelerated 3-4 h after drug administration; excretion of soft faeces was evident within 4-5 h and reached its maximum 5-7 h after administration.
Large intestine transit time was dose- and time-dependently influenced by sennoside treatment. A highly significant reduction in transit time from more than 6 h in controls to 90 min for a 2 h pretreatment and a nearly maximal reduction to 30 min for a 4 h pretreatment was induced by a dose of 50 mg kg.
Inhibition of net fluid absorption in the colon was maximal with the same dose, but clearly more pronounced after a 6 h pretreatment period than after a 4 h period. Since the increase in fluid volume due to net fluid secretion is delayed compared with the acceleration of large intestine transit, the early motility effect seems to be largely independent of the changes in absorption mechanisms. Therefore, the laxative effect of the sennosides consists of changes in colon motility as well as in colonic fluid absorption, but motility may be an earlier and more sensitive parameter than net absorption. (2)

A combination herbal product (UVA-E) was evaluated in one randomized, double-blind, placebocontrolled trial. This product (containing uva ursias an antiseptic and dandelion as a mild diuretic) or a placebo was given to healthy women with recurrent cystitis. Treatment for month significantly reduced recurrence during the 1-year follow-up period, with no cystitis in the herbal group (0 of 30) versus 23% recurrence in the placebo group (5 of 27; P < 0.05). (3)

Functional dyspepsia is extremely common, yet few if any treatments have been shown to be effective. This review examines the potential benefits and risks of using herbal products in treating symptoms of dyspepsia.
A few randomized controlled clinical trials suggest that peppermintessential oil is effective in reducing abdominal pain, flatulence and diarrhea in patients with "irritable bowel syndrome". Peppermint tea, containing essential oil, has no known adverse effects. (4)

Peppermint (Mentha piperita L.) is one of the most widely consumed single ingredient herbal teas. Peppermint tea, brewed from the plant leaves, and the essential oil of peppermint are used in traditional medicines. Evidence-based research regarding the bioactivity of this herb is reviewed. The phenolic constituents of the leaves include rosmarinic acid and several flavonoids, primarily eriocitrin, luteolin and hesperidin. The main volatile components of the essential oil are menthol and menthone. In vitro, peppermint has significant antimicrobial and antiviral activities, strong antioxidant and antitumor actions, and some antiallergenic potential. Animal model studies demonstrate a relaxation effect on gastrointestinal (GI) tissue, analgesic and anesthetic effects in the central and peripheral nervous system, immunomodulating actions and chemopreventive potential. Human studies on the GI, respiratory tract and analgesic effects of peppermint oil and its constituents have been reported. Several clinical trials examining the effects of peppermint oil on irritable bowel syndrome (IBS) symptoms have been conducted. However, human studies of peppermint leaf are limited and clinical trials of peppermint tea are absent. Adverse reactions to peppermint tea have not been reported, although caution has been urged for peppermint oil therapy in patients with GI reflux, hiatal hernia or kidney stones. (5)

Lycopene, an efficient antioxidant and singlet oxygen quencher, is mainly delivered within the human diet out of tomatoes and tomato products. Processing liberates this carotenoid from complexes with proteins and thus makes it more bioavailable. Rosehip, a wild fruit which is used more often recently to produce mark, jams and juices, showed remarkable contents of lycopene (12.9-35.2 mg/100 g) with an unexpected isomer pattern. (6)

Chamomile is one of the most popular single ingredient herbal teas. Chamomile tea, brewed from dried flower heads, has been used traditionally for medicinal purposes. The main constituents of the flowers include several phenolic compounds, primarily the flavonoids apigenin, quercetin, patuletin, luteolin and their glucosides. The principal components of the essential oil extracted from the flowers are the terpenoids alpha-bisabolol and its oxides and azulenes, including chamazulene.
Chamomile has moderate antioxidant and antimicrobial activities, and significant antiplatelet activity in vitro. Animal model studies indicate potent antiinflammatory action, some antimutagenic and cholesterol-lowering activities, as well as antispasmotic and anxiolytic effects. However, human studies are limited, and clinical trials examining the purported sedative properties of chamomile tea are absent. Adverse reactions to chamomile, consumed as a tisane or applied topically, have been reported among those with allergies to other plants in the daisy family, i.e. Asteraceae or Compositae. (7)