In stock
SKU
351
Be the first to review this product 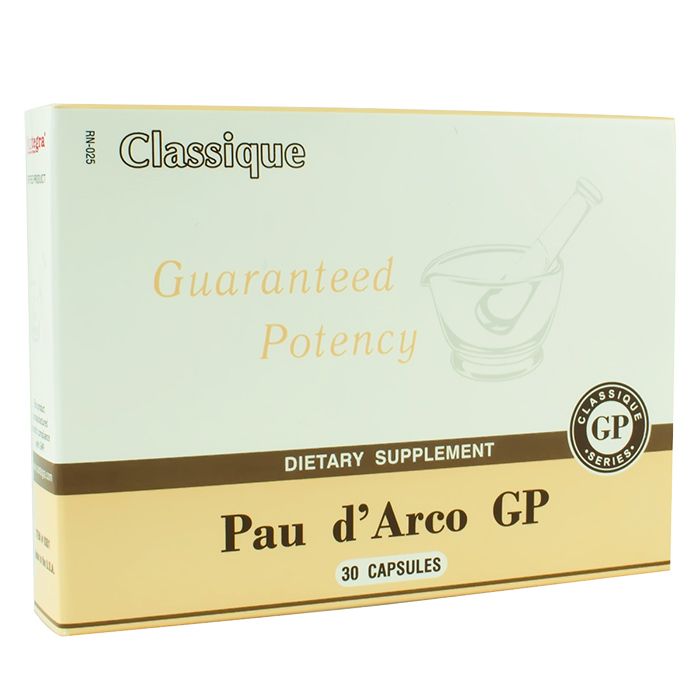 Pau d’Arco tea has been used for many centuries by the tribes of South America. The ancient Incas and Aztecs were probably the first to discover the herb’s healing powers.
Pau d’Arco was applied externally and internally for the treatment of fevers, infections, colds, flu, syphilis, cancer, respiratory problems, skin ulcerations and boils, dysentery, gastro-intestinal problems of all kinds, debilitating conditions such as arthritis and prostatitis, and circulation disturbances. It was used to relieve pain, kill germs, increase the flow of urine, and even as an antidote to poisons. (1)

The Guarani, Tupi and other tribes called the Pau d’Arco tree "Tajy," meaning "to have strength and vigor," or simply, "The Divine Tree."

One of the most important properties of  Pau d’Arco is its ability to mobilize the body’s host defenses.

Some constituents or groups of constituents of Pau d’Arco have been found to suppress tumor formation and reduce tumor viability, both in experimental animal trials and in clinical settings involving human patients.

The anti-inflammatory and wound healing actions of Pau d’Arco extract were also demonstrated in clinical studies.

There is some evidence that Pau d’Arco can be useful in lessening the pain.

Pau d’arco due to its unique properties is very popular all over the world now. Unfortunately, its popularity has been controversial due to varying results obtained with its use. For the most part, these seem to have been caused by a lack of quality control. Some products exported from South America as “pau d’arco,” have few to none of the active constituents.

Santegra® thoroughly controls the quality of raw materials and manufactured products. That is why Pau d’Arco GP contains Pau d’Arco bark extract (4:1) with 3% naphtoquinones, which guarantees its effectiveness.

As a dietary supplement, take 1-2 capsules daily with a glass of water.

Pau d’Arco (Tabebuia impetiginosa) inner bark contains a large amount of chemicals known as quinoids, and a small quantity of benzenoids and flavonoids. These quinoids (and, chiefly, naphthoquinones – lapachol, beta-lapachone etc.) have shown the most documented biological activity.

Pau d'arco has demonstrated broad spectrum of actions against a number of disease-causing microorganisms. Antimicrobial properties of many of pau d'arco's active phytochemicals were demonstrated in several clinical studies, in which they exhibited strong “in vitro” activity against bacteria and yeast. Naphthoquinones have antifungal activity. (2)

Tabebuia impetiginosa active constituents have demonstrated “in vitro” antiviral properties against various viruses (including Herpes I and II, influenza, and vesicular stomatitis).

Its antiparasitic actions against various parasites (including malaria, schistosoma, and trypanosoma) have been confirmed as well.

In clinical trials naphthoquinones demonstrated «in vitro» significant activity against cancerous tumors. (3,4) One study reported that lapachol increased the life span of mice inoculated with leukemic cells by over 80%.

Another chemical in Pau d'arco, beta-lapachone, has demonstrated in laboratory studies to have activities similar to lapachol, with few side-effects.

Impaired wound healing is a serious problem for diabetic patients. Wound healing is a complex process that requires the cooperation of many cell types, including keratinocytes, fibroblasts, endothelial cells, and macrophages. beta-Lapachone, a natural compound extracted from the bark of the lapacho tree (Tabebuia avellanedae), is well known for its antitumor, antiinflammatory, and antineoplastic effects at different concentrations and conditions, but its effects on wound healing have not been studied. The purpose of the present study was to investigate the effects of beta-lapachone on wound healing and its underlying mechanism. In the present study, we demonstrated that a low dose of beta-lapachone enhanced the proliferation in several cells, facilitated the migration of mouse 3T3 fibroblasts and human endothelial EAhy926 cells through different MAPK signaling pathways, and accelerated scrape-wound healing in vitro. Application of ointment with or without beta-lapachone to a punched wound in normal and diabetic (db/db) mice showed that the healing process was faster in beta-lapachone-treated animals than in those treated with vehicle only. In addition, beta-lapachone induced macrophages to release VEGF and EGF, which are beneficial for growth of many cells. Our results showed that beta-lapachone can increase cell proliferation, including keratinocytes, fibroblasts, and endothelial cells, and migration of fibroblasts and endothelial cells and thus accelerate wound healing. Therefore, we suggest that beta-lapachone may have potential for therapeutic use for wound healing. (5)

Volatiles were isolated from the dried inner bark of Tabebuia impetiginosa using steam distillation under reduced pressure followed by continuous liquid-liquid extraction. The extract was analyzed by gas chromatography and gas chromatography-mass spectrometry. The major volatile constituents of T. impetiginosa were 4-methoxybenzaldehyde (52.84 microg/g), 4-methoxyphenol (38.91 microg/g), 5-allyl-1,2,3-trimethoxybenzene (elemicin; 34.15 microg/g), 1-methoxy-4-(1E)-1-propenylbenzene (trans-anethole; 33.75 microg/g), and 4-methoxybenzyl alcohol (30.29 microg/g). The antioxidant activity of the volatiles was evaluated using two different assays. The extract exhibited a potent inhibitory effect on the formation of conjugated diene hydroperoxides (from methyl linoleate) at a concentration of 1000 microg/mL. The extract also inhibited the oxidation of hexanal for 40 days at a level of 5 microg/mL. The antioxidative activity of T. impetiginosa volatiles was comparable with that of the well-known antioxidants, alpha-tocopherol, and butylated hydroxytoluene. (8)

Drugs containing a quinone moiety, such as anthracyclines, mitoxantrones and lapachol, show excellent anticancer activity. In this study, 2-butanoylamine-1,4-naphthoquinone (1) and 2-propanoylamine-1,4-naphthoquinone (2) derivatives from 2-amine-1 ,4-naphthoquinone were synthesized, and their antitumor activity in mice bearing Sarcoma 180 tumor were examined. In addition, hematology and biochemistry analyses, as well as, histopathological and morphological analyses were performed in order to evaluate the toxicological aspects of the naphthoquinones treatment. Both naphthoquinones showed potente antitumor activity. The inhibition rates were 33.48 and 42.35% for (1) and 37.65 and 55.24% for (2) at the dose of 25 and 50 mg/kg/day, respectively. In the histopathological analysis, the naphthoquinones showed only weak toxicity. Neither enzimatic activity of transaminases (aspartate aminotransferase-AST nor alanine aminotransferase-ALT), urea level nor hematological paramenter were significantly modified after naphthoquinones treatment. These data reinforce the anticancer potential of naphthoquinones derivatives. (9)
Instituto de Biofísica Carlos Chagas Filho, Laboratório de Controle da Expressão Gênica, Universidade Federal do Rio de Janeiro, Centro de Ciências da Saúde, Bloco C, Cidade Universitária, CEP 21949-900, Rio de Janeiro, RJ, Brasil.

Metastasis is the major process responsible for the death in cancer patients. In the search for more effective antineoplasic drugs, many substances are under investigation, among them lapachol. This study aims to examine the molecular and morphological alterations caused by lapachol treatment, as well as its effects on the intrinsic tissue invasive property of this cell line. HeLa cells were exposed to different concentrations of lapachol, and the resulting alterations on cellular protein profile, morphology and invasiveness property were studied. At 400 microg/ml, cellular viability remains unchanged, but lapachol induces alterations in the protein profile and inhibits the invasiveness of HeLa cells in CAM model. With these results, we can conclude that lapachol has a great potential of application in fighting metastasis. (10)

The synthesis and evaluation of some 2-substituted-1,4-naphthoquinones 2, S-(1,4-naphthoquinon-2-yl)-mercaptoalkanoic acid amides 4, related benzoquinone and naphthoquinone derivatives 6-9 and 2,3-disubstituted 1,4-naphthoquinones 10-11 were carried out. The antifungal, antibacterial, antiviral and anticancer activities were determined by using the standard assay. The results show that compounds 2b and 10a showed in vitro antiviral activity against Influenza-A Virus and Herpes Simplex Virus and possess pronounced antifungal profile whereas 4a showed anticancer activities against Lymphoid Leukaemia P 388. (11)

Lapachol has been used as a topical barrier to trematodes specifically Shcistosoma mansion, which causes schistosomiasis. This parasite lives in water and enters the host by penetrating through the skin. This pathogen can cause a complicated disease, which can sometimes be fatal. Also it is stated that oral lapachol formulation to be effective against skin penetration. In addition, lapachol is claimed to have some effect against Trypanosoma cruzi, which causes trypanosomiasis or Chaga’s disease. (12)

The biological activities of the naphthoquinones lapachol and its cyclization product beta-lapachone, extracted from trees of the genus Tabebuia, have been intensively studied. Given continuity to the studies about heterocyclic derivatives obtained from the reaction of these naphtoquinones with amino-containing reagents, 22 derivatives of beta-lapachone, nor-beta-lapachone and lapachol were synthesised and their activities against trypomastigote forms of T. cruzi were evaluated. The compounds were grouped as oxazolic, imidazolic, phenoxazinic, indolic, pyranic and cyclopentenic derivatives. The variability of the new structures is based on the great electrophilicity of 1,2-quinoidal carbonyls towards reagents containing nitrogen or carbon as nucleophilic centres. In relation to the trypanocidal activity of the synthesised compounds, in view of their structural diversity, tendencies only could be verified. Among the cyclofunctionalised products the oxazolic and imidazolic derivatives showed +/- 1.5 to 34.8 times higher activity than crystal violet, the standard drug for the sterilization of stored blood. These results corroborate the tendency of trypanocidal activity in imidazolic skeletons, and indicate that this moiety could be used as a guide for architectural delineation of molecules with potential value for the chemotherapy of Chagas disease. (13)