In stock
SKU
203
Be the first to review this product

“Father of all herbs”, this product contains the unique spectrum of vitamins and minerals. The combination of the unique old recipes with the latest achievements of nutritional science, it has been manufactured using non-GMO high quality pure herbs and the technology that ensures all their beneficial properties intact, in strict compliance with FDA, GMP and TÜV regulations. 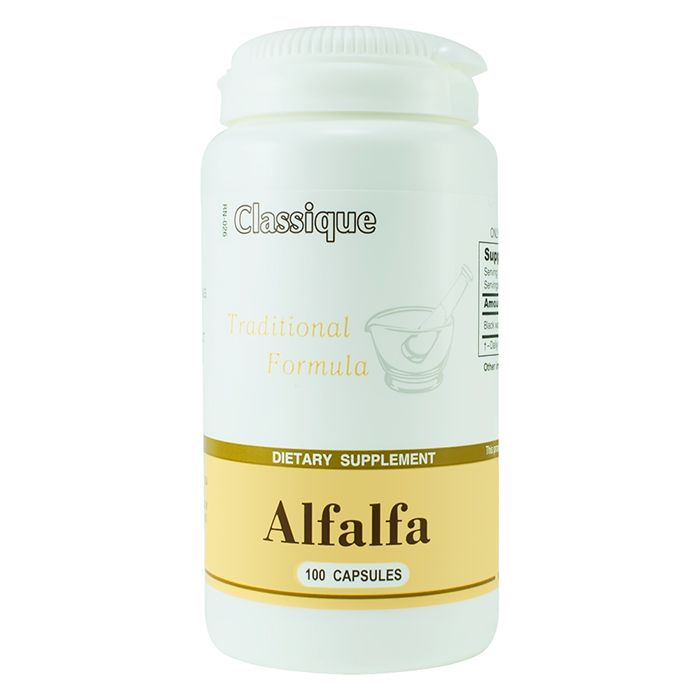 Alfalfa (Medicago sativa), also known as Lucerne, and Purple Medic is used in herbal medicine for centuries. First it was discovered by the Arabs, who named this valuable plant "Al-Fal-Fa" which means "father of all foods".

This wonderful herb has the ability to cleanse the body of toxins, support healthy heart and liver functions, improve appetite and digestion, and increase endurance.
Many years ago, Chinese healers used new Alfalfa leaves to treat gastro-intestinal problems. (1)

In traditional Ayurvedic medicine Alfalfa was prescribed to improve digestion. It was considered useful to get rid of extra fluids from the body, and also for arthritis.
North American Indians used it to treat jaundice and to improve blood coagulation.

In the 19-th century American doctors recommended Alfalfa as a tonic for digestive dysfunctions, dyspepsia, anemia, lack of appetite, and better nutrient assimilation. (2)

They also used Alfalfa to increase lactation in breastfeeding mothers, and the seeds were made into a poultice for the treatment of boils and insect bites.

Alfalfa, rich in fiber, belongs to legume family; it possesses many qualities beneficial to human health, and is widely used as a dietary supplement.

It is suggested that this plant helps to purify the body, to decrease the cholesterol and sugar levels, to support liver and heart functions, to relieve menopause symptoms, to increase energy level, and to fight fatigue.

Alfalfa has a wide spectrum of action due to its active ingredients, such as saponins (about 2-3 %) (3), flavones, isoflavones, sterols, and coumarin derivatives.

Alfalfa is rich in chlorophyll, fibers, proteins, contains vitamin A, B1, B6, C, and E, vitamin K, calcium, magnesium, phosphorus, potassium, iron, zinc, polyunsaturated fatty acids, and some proteolytic enzymes, that break down proteins and facilitate its assimilation.
Animal clinical trials showed that saponins in Alfalfa bind with cholesterol, help with its removal from the body, and prevent atherosclerotic plaque formation. (4)

The results of one clinical trial proved that Alfalfa has an ability to reduce cholesterol level in humans. (5)

Saponins, similar to those found in ginseng, can show adaptogenic activity.
Alfalfa has anti-inflammatory action.
Isoflavones in this herb show estrogen-like activity (6), and therefore Alfalfa is recommended for relieve of menopause symptoms.

Alfalfa is a natural multivitamin dietary supplement, wonderful product for maintaining good overall health, quality-checked by centuries, beneficial for everyone.

As a dietary supplement take 2 capsules 3 times a day with a glass of water.

Alflalfa (Medicago sativa L.) has been cultivated since ancient times in Europe, Asia, and Africa as fodder plant. This herb produces the highest quantity of protein per hectare than any other fodder plant and is considered to have the highest nutritive value among all.

Since early 20th century, some scientific studies were carried out in order to disclose alfalfa’s properties. The first studies performed in animals confirmed the high nutritional value of this plant species.

Besides its accepted nutritional value, alfalfa is beneficial for human health.
Alfalfa has a unique root system that makes it very different from most other plants. The roots of the alfalfa reach deep into the soil, has access to moisture and minerals most other plant roots are unable to reach. Alfalfa roots grow as deep as 20 feet or more, providing the plant with a rich source of nutrients not always found at the ground’s surface.
Because of a long root system, alfalfa contains an enormous quantity of nutrients, in a form that is easily digested and assimilated by man. It is very high in minerals and vitamins, particularly calcium, iron, magnesium, potassium, and vitamin K.

As a single source alfalfa has one of the highest levels of protein. It contains more protein than milk and eggs when measured by equal weight.
Alfalfa is an herb high in compounds called saponins that may interfere with lipid breakdown and absorption in the gut, lowering cholesterol, and prevent the formation of atherosclerotic plaques.

Alfalfa contains phytoestrogens called isoflavones, which can have a moderate estrogenic effect in the body. Isoflavones are also found in red clover and in soy products and are touted today as a safe alternative to estrogen supplements during and after menopause.
It is not uncommon for Asian women to consume up to 200 mg of isoflavones a day in the diet, far higher than the average 10 or 20 mg that is common among North Americans and Europeans. Some research suggests that isoflavones may be partially responsible for the lower rates of prostate and reproductive cancers found in Asia, and possible the lower rate of undesirable menopausal symptoms, though this has yet to be proven in high-quality clinical trials.

Fifteen patients with hyperlipoproteinemia (HLP), types IIA (n = 8), IIB (n = 3) and IV (n = 4) were given 40 g of heat prepared alfalfa seeds 3 times daily at mealtimes for 8 weeks with otherwise unchanged diet. In patients with type II HLP alfalfa treatment caused after 8 weeks a maximal lowering of pretreatment median values of total plasma cholesterol from 9.58 to 8.00 mmol/l (P less than 0.001) and low-density lipoprotein (LDL) cholesterol from 7.69 to 6.33 mmol/l (P less than 0.01), which corresponds to decreases of 17% and 18%, respectively. (6)

Alfalfa (Lucerne) (Medicago sativa) is a leguminous plant with high contents of phytoestrogen and saponin which are both useful in preventing cardiovascular disorders. This study was designed to evaluate the preventive effect of dietary alfalfa on the development and the progression of atherosclerosis in hyperlipidemic rabbits.

Twenty male rabbits were obtained and kept under standard conditions. After 2 weeks of accommodation to the new place, the animals were semi-randomly distributed into four groups of five each. Animals in Group 1 received basic diet and the ones in Group 2 received the same diet to which 1% cholesterol was added. Groups 3 and 4 received similar diets as Groups 1 and 2 respectively but supplemented with alfalfa. Each of the four groups was fed with its respected diet for a period of 12 weeks. Fasting blood samples were collected from all animals at the beginning and at the end of the study and blood factors were measured. At the end of the study samples from the right and the left coronary arteries as well as the aorta were collected from all animals for pathological evaluations.
Though dietary alfalfa decreased total cholesterol, LDL and triglyceride and this effect was not significant, but dietary alfalfa significantly increased HDL. The formation of fatty streaks in the aorta, the right and the left coronary arteries were significantly reduced under the influence of dietary alfalfa. (7)

Thus, gallstones can be formed in prairie dogs in the absence of exogenous cholesterol; gallstone incidence is reduced by dietary fiber. (9)

Diabetes is a common metabolic disorder that is specified by hyperglycemia resulting from defects in insulin secretion, insulin action, or both. The use of nonpharmacological treatments (herbal agents) is a new approach in the management of diabetes. The aim of this study was to investigate the effect of aqueous extract of alfalfa on blood glucose and serum lipids in alloxan-induced diabetic rats. In this study, 32 female rats (210–250 g) were used which were divided randomly into 4 groups including intact control group, diabetic control group, and 2 diabetic groups which received 250 and 500 mg/kg doses of aqueous extract of alfalfa, respectively. In the diabetic groups, alloxan-monohydrate was injected peritoneally to create diabetic condition. The two last groups orally received aqueous extract of alfalfa for 21 days. At the end of experiment, sugar, cholesterol, triglycerides, high-density and low-density lipoprotein, and aspartate aminotransferase (ALT) and alanine aminotransferase (AST) levels were measured in the samples. Consumption of aqueous alfalfa extract significantly reduced glucose, cholesterol, triglycerides, and low-density lipoprotein (LDL) levels in the diabetic rats but enhanced high-density lipoprotein (HDL) levels. ALT and AST liver enzyme levels were also reduced in blood. Histological examination showed that the aqueous alfalfa extract caused reconstruction of damaged liver and enhanced Langerhans islets’ diameter in pancreas. Therefore, all signs of diabetes were improved by oral administration of alfalfa in defined dose. (10)

Objectives: Dihydrotestosterone (DHT) is known as the main cause of androgenetic alopecia (AGA). We previously reported that sulforaphane (SFN), a compound extracted from broccoli, promotes hair regeneration in ob/ob mice by lowering plasma DHT levels. The aim of this study was to assess whether SFN could decrease plasma DHT in human.
Methods: We conducted a randomized, double-blind trial to evaluate the effect of SFN on participants following oral intake of SFN-rich broccoli sprouts compared with alfalfa sprouts (control). Eighty-seven healthy male participants between the ages of 30 and 60 years were divided into two groups: broccoli or alfalfa sprouts daily intake for one month. Serum testosterone and DHT were determined before and after intervention.