In stock
SKU
13280
Be the first to review this product

CoQ10 is created using the unique technology to achieve the greatest absorption and bioavailability due to the most effective transportation of CoQ10 and its full solubility. The new CoQ10 is encapsulated in clear capsules, unlike the other CoQ10 products available on today’s market that contain crystals and are packed in opaque capsules. The clinical study showed that new CoQ10 had relative bioavailability that was 441% greater than that of standard dry CoQ10 powder. 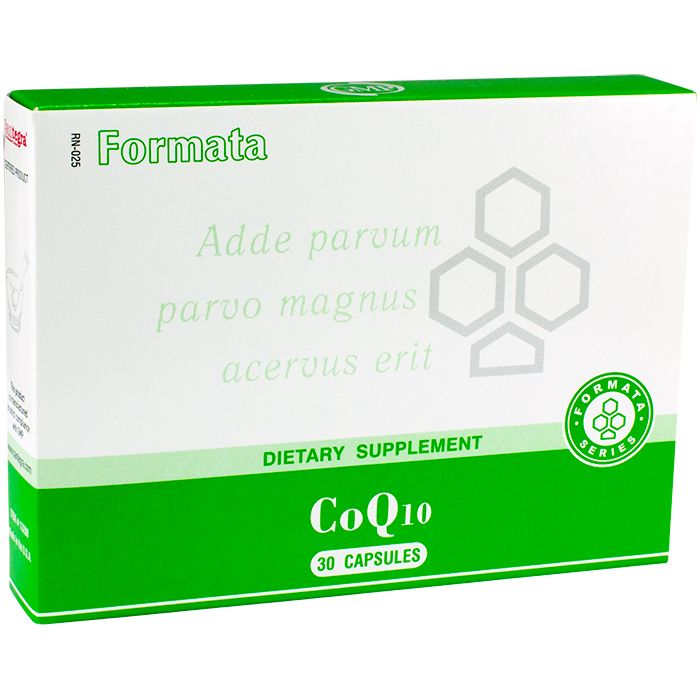 In today’s world a growing number of people are suffering from cardio-vascular diseases. And in spite of the fact that statistics are far from comforting, we have the power to change it. Our health and longevity depends only on us, and our life style. It is not a secret anymore that one of the major factors of a healthy lifestyle is proper nutrition. If for some reason your body does not receive an adequate amount of vitamins, minerals, and nutrients; food supplements can help.

One of food supplements associated with heart health is Coenzyme Q10.
Ubidecarenone is an official name of Coenzyme Q10 in Pharmacopoeia of the USA.

Coenzyme Q10 is a widespread substance, found naturally in every cell of the body of every human being, animal, and even microorganism.

Coenzyme Q10 was first identified in bull’s heart mitochondria in 1957 in the University of Wisconsin (USA). (1) In the 60’s of the last century CoQ10 started being widely used in Europe and Japan.
Studies conducted on this co-enzyme in the past years demonstrated its vital importance for the body’s normal functioning.

First of all CoQ10 is crucial for the energy production in the mitochondria of living cells.
Second, CoQ10 is a potent antioxidant, which protects cells from free radical’s damage.
CoQ10 is required for all organs in the body, especially those with high energy demands.

Coenzyme Q10 provides an increasing energy in the cardiac muscle and it is essential for the heart, since heart requires twice more energy than other organs of the body.
Unfortunately the CoQ10 content in cells is decreasing with age. The research shows that a maximal content of CoQ10 is observed between the ages 19-21, and by the age 80 it drops down to 65%. (2)
Other factors that decrease the CoQ10 level are an unbalanced diet, harmful effects of the environment, intense physical work load, and some medication.

Our body is capable of producing Coenzyme Q10 in a sophisticated process with a lot of different enzymes, vitamins, and microelements present. The synthesis of CoQ10 can be complicated by lack of some substances inside the body, since the diet of modern man is far from ideal. You can fulfill the CoQ10 deficit in your organism with the help of some food products such as the inside organs of animals, mackerel, sardines, peanuts.
The necessary daily dose of CoQ10 is 30 - 90 mg. To achieve this dose you have to eat more than a pound of sardines, or two pounds of beef liver!
It is established that most of us only receive 2 to 10 mg of CoQ10 daily; an absolutely insufficient amount.

It is considered that the decrease of CoQ10 level in the body by 25% can trigger the pathologic process mechanisms causing cardiological diseases, diabetes, parodontosis, weak immune response, and an overall decrease in vitality of the body. That is why it is so important to take supplemental CoQ10 for middle aged and older people.

Adequate amount of CoQ10 is vital for the proper immune system functions. Different medical trials demonstrated that CoQ10 increased the phagocytic activity of macrophages, and increased the amount of antibodies.

CoQ10 is useful in dealing with allergies.

Clinical trials showed the positive effect of CoQ10 on gums.

CoQ10 normalizes metabolism, acts as catalyst in fat burning process, helps with weight control, and increases endurance of the body.

CoQ10 helps avoid premature aging, acts as natural anti-oxidant, and protects from the harmful effect of free radicals, and as the result of this has a positive effect on the internal state of the body, and the appearance.

The new Santegra®’s product – the unique CoQ10 formula, is created on the basis of the latest advanced scientific research. Several new manufacturing methods were used in the production process that improved solubility and assimilation of CoQ10.

The new formula provides the most effective transportation of CoQ10 to the cells in the body. Lipid combination (linoleic acid and linseed-oil) is used as a transporting agent. Lipid blend aids in dissolving the CoQ10 powder, preventing  recrystalization, and enhancing  absorption and bioavailability.

You can judge the quality of this new product by its appearance. All the CoQ10 products available on today’s market contain crystals and are packed in opaque capsules. CoQ10 created by Santegra® is packed in the clear capsules - we have nothing to hide!

CoQ10 formula is is all-natural, with no chemical additives or solvents.

The human double-blind, randomized clinical study showed that new CoQ10 had a peak absorption that was 808% higher and relative bioavailability that was 441% greater than that of standard dry CoQ10 powder.

CoQ10 is vital for every cell of our body, that is why we are proud to say that the unique qualities of this new Santegra®’s product makes it many times more effective than all the previous ones.

As a dietary supplement take one capsule daily with a large glass of water for a month.

The new product by Santegra® is the most bioavailable form of CoQ10 on the market today. The positive effect of CoQ10 on the human body is well known, but its low bioavailability was a problem for a long time. The new unique methods were used in the manufacturing process that helps increase solubility and absorbency of coenzyme Q10.

The human double-blind, randomized clinical study showed that new CoQ10 had a peak absorption that was 808% higher and relative bioavailability that was 441% greater than that of standard dry CoQ10 powder.

The new CoQ10 AUC (0-28 day) was 53.31 ug/ml a day compared to 9.85 for the dry powder. (pic. 1 CoQ10 Plasma Bioavailability)
36-hour peak absorption study showed that 7.89% of the 100 mg dose of the new CoQ10 was absorbed at Cmax and an estimated total absorption was 11.65% compared to 0.87% at Cmax and 1.34% estimated total absorption for the dry powder product standard. (pic. 2 CoQ10 Absorption)
In a 28 day steady state bioavailability study, the basal steady state plasma CoQ10 levels were 3.46 ug/ml for the new CoQ10 compared to 1.35 ug/ml for the standard CoQ10 powder.
This means that much lower daily dose of CoQ10 is required to achieve an effective level.

Numerous clinical trials have provided evidence, supporting the use of CoQ10 in the prevention and treatment of various disorders related to oxidative stress.

A multicenter, randomized, double-blind, placebo-controlled study by Morisco et al. evaluated the effect of CoQ10 in patients with NYHA Class III and IV HF receiving conventional treatment for heart failure. All enrolled patients had symptoms of dyspnea and/or fatigue with signs of fluid retention and no evidence of pulmonary disease. Subjects were randomized to receive adjunctive therapy of either placebo (n=322) or CoQ10 2 mg/kg/day (n=319) up to a maximum daily dose of 150 mg for one year. Assessment parameters at 3, 6, and 12 months included the incidence of hospitalization, pulmonary edema, cardiac asthma, ventricular arrhythmias, or mortality. Conventional drug regimens, adjusted to maintain hemodynamic stability, and patient demographics were similar in both groups. The incidence of one or more hospitalizations for symptomatic CHF in both the CoQ10 and placebo groups were 20% and 40% (p<0.01), respectively. The number of deaths in each group was not statistically significant. The authors concluded that the incidence of pulmonary edema, cardiac asthma, and arrhythmia was significantly lower in the CoQ10 group vs. the placebo group and that treating 1000 patients for one year with study doses of CoQ10 may prevent 200 hospitalizations due to worsening CHF symptoms. (3)

Baggio et al. (1994)  studied the efficacy of CoQ10 as adjunctive therapy in an open, prospective, noncomparative, multicenter study of 2,359 evaluable patients with heart failure in NYHA Class II (n=1,715) or III (n=644) stabilized on conventional therapy. Patients received 50–150 mg/day of CoQ10. At the end of the three-month study period, the proportions of patients with improvements in clinical and functional assessment from baseline were documented. The results indicated improvements in cyanosis (78.1%), edema (78.6%), pulmonary rales (77.8%), hepatomegaly (49.3%), jugular reflux (71.8%), dyspnea (52.7%), palpitations (75.4%), sweating (79.8%), vertigo (73.1%), subjective arrhythmia (63.4%), insomnia (62.8%) and nocturia (53.6%). Fifty-four percent of patients had improvements of at least three symptoms. Moreover, 28.8% of patients entered as NYHA Class III improved in score to Class II and 89.7% of patients entered as NYHA Class II improved in score to Class I. The authors concluded that patients receiving CoQ10 improved functionally and that patients in NYHA Class II showed better improvement rates than did patients in NYHA Class III. (4)

In a double-blind, randomized, placebo-controlled crossover trial of 12 adults with stable angina on conventional therapy, supplements of 150 mg/day of CoQ10 for four weeks showed a decrease in both anginal frequency and use of nitroglycerin (p>0.05). (5)

Increasing numbers of the adult population are using alternative or complementary health resources in the treatment of chronic medical conditions. Systemic hypertension affects more than 50 million adults and is one of the most common risk factors for cardiovascular morbidity and mortality. This study evaluates the antihypertensive effectiveness of oral coenzyme Q10 (CoQ), an over-the-counter nutritional supplement, in a cohort of 46 men and 37 women with isolated systolic hypertension. METHODS: We conducted a 12-week randomized, double-blind, placebo-controlled trial with twice daily administration of 60 mg of oral CoQ and determination of plasma CoQ levels before and after the 12 weeks of treatment. RESULTS: The mean reduction in systolic blood pressure of the CoQ-treated group was 17.8 +/- 7.3 mm Hg (mean +/- SEM). None of the patients exhibited orthostatic blood pressure changes. CONCLUSIONS: Our results suggest CoQ may be safely offered to hypertensive patients as an alternative treatment option.  (6)

In a randomized, double-blind trial of hypertensive patients with coronary artery disease (CAD) (1999), the effects on blood pressure and insulin resistance of CoQ10 (60 mg twice daily) was compared to vitamin B complex. After an eight-week period, reductions were reported in the following indices: systolic and diastolic blood pressure; lipid peroxidase; fasting and 2-hour plasma insulin; blood glucose; and serum triglyceride levels. Moreover, an increase in high density lipoprotein (HDL)-cholesterol and vitamins A, C, and E, and beta carotene serum concentrations in the CoQ10 treated group were observed. However, an increase in vitamin C and beta carotene serum concentrations were the only changes seen in the vitamin B complex group. (7)

Coenzyme Q10 improves blood pressure and glycaemic control: a controlled trial in subjects with type 2 diabetes by Hodgson J.M. and co-authors (2002). The objective was to assess effects of dietary supplementation with coenzyme Q10 (CoQ) on blood pressure and glycaemic control in subjects with type 2 diabetes, and to consider oxidative stress as a potential mechanism for any effects.
Seventy-four subjects with uncomplicated type 2 diabetes and dyslipidaemia were involved in a randomised double blind placebo-controlled 2x2 factorial intervention.
The study was performed at the University of Western Australia, Department of Medicine at Royal Perth Hospital, Australia.
Subjects were randomly assigned to receive an oral dose of 100 mg CoQ twice daily (200 mg/day), 200 mg fenofibrate each morning, both or neither for 12 weeks.
Fenofibrate did not alter blood pressure, HbA(1c), or plasma F2-isoprostanes. There was a 3-fold increase in plasma CoQ concentration (3.4+/-0.3 micro mol/l, P<0.001) as a result of CoQ supplementation. The main effect of CoQ was to significantly decrease systolic (-6.1+/-2.6 mmHg, P=0.021) and diastolic (-2.9+/-1.4 mmHg, P=0.048) blood pressure and HbA(1c) (-0.37+/-0.17%, P=0.032). Plasma F2-isoprostane concentrations were not altered by CoQ (0.14+/-0.15 nmol/l, P=0.345).
These results show that CoQ supplementation may improve blood pressure and long-term glycaemic control in subjects with type 2 diabetes. (8)

Studies have demonstrated that the degree of CoQ10 deficiency is correlated with the severity of immune compromised diseases. A clinical case series of eight adult patients treated with 60 mg/day of CoQ10 reported significant increases in serum IgG levels over 1–4 months. (10)